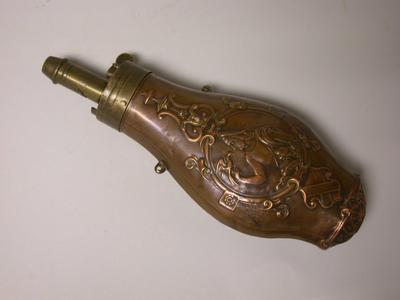 Description
This unmarked powder flask was made in nineteenth-century France. French powder flasks differed from those made in England and the United States in several ways. The easiest way to identify whether an unmarked flask is French is through the presence of a charger with metric measurements. The designs on French powder flasks also tend to be more finely crafted and detailed than those found on English or American items. In addition to these traits, some French flasks also have distinctive shapes. The form of this object, with its bowed middle section and tapered ends, was unique to powder flasks made in France.