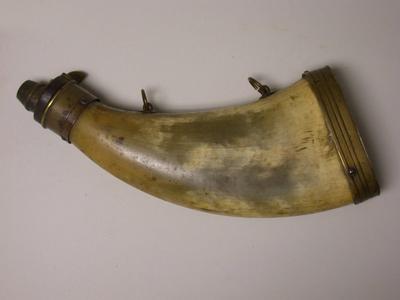 Description
Although the number of powder flasks made from horn decreased sharply during the 1800s, they were never entirely replaced by metal flasks. Horn flasks were marketed as high-end luxury items by makers in both Europe and the United States during the nineteenth century. These flasks were somewhat similar to earlier powder horns but were often shaved down, highly finished, and fitted with modern brass amenities. This unmarked flask was made in either England or the United States. Although the horn style was popular in numerous countries, the unique charger design reveals an English or American origin.