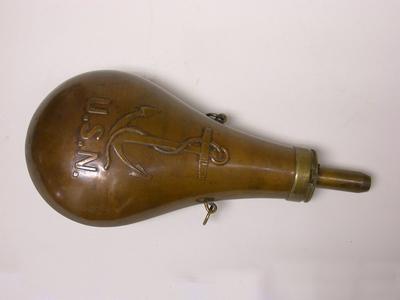 Description
During the nineteenth century, the U.S. government relied on private companies to manufacture powder flasks for the military. Most of these contractors, like George Adams, were located in New England, the most-heavily industrialized region of the country. In 1845, Adams was first awarded a contract to make flasks for the U.S. Navy. This initial order called for 1,200 flasks. The design found on this item was standard for navy flasks at the time. It was originally used by Nathan P. Ames in 1843 and later by George Stimpson. Adams’ contract with the military was renewed through 1848. All of Adams’ flasks feature the same fouled anchor design.