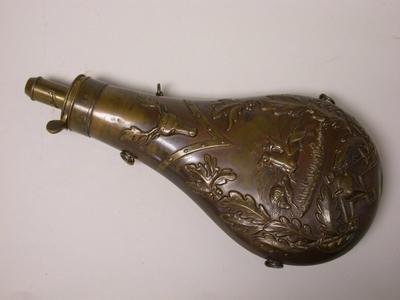 Description
By the 1860s, flask making was an increasingly industrialized process. Factories like the one owned by the American Flask & Cap Co. mass produced thousands of powder flasks for hunters and the military. A larger supply of flasks meant that makers gave more and more stores permission to sell their products. Store owners were provided with catalogues that they and their customers could use to pick out which flasks they wanted to order. These catalogues included information on flask size, design, and price. Consumers were also able to buy flasks made from a variety of materials. This flask was listed as the “Oak Wreath and Buffalo” flask in the 1864 American Flask & Cap Co. catalog. It was based on a design used by Frary, Benham & Co., an earlier firm purchased by the American Flask & Cap Co. in 1857.