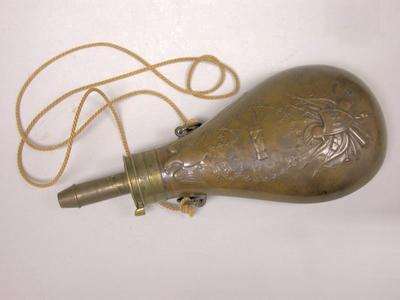 Description
During the nineteenth century, the U.S. government relied on private companies to manufacture powder flasks for the military. Most of these contractors, like Nathan P. Ames, were located in New England, the most-heavily industrialized region of the country. Ames began making flasks for the army in 1837. His first contract asked him to improve upon the copper flasks that Robert Dingee had previously made for the military. Dingee’s flasks were criticized as both ugly and lightweight. In response, Ames produced this heavier, more intricately-detailed design which became known as the “Peace flask.” This decoration featuring two clasped hands in a gesture of national unity became incredibly popular and was featured on all flasks Ames later made for the military.