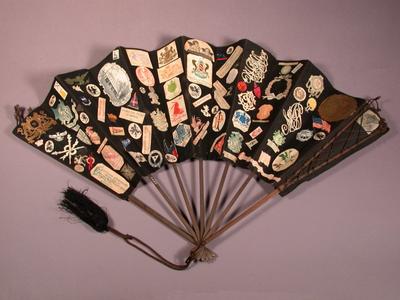 Description
Late in the nineteenth-century a unique way to use scrap became common. Black paper hand fans, mostly with a small white flower design and made in Japan, were purchased to make what is now known as a late Victorian scrap hand fan. Paper keepsakes were cut out and glued onto the back of the fan.

This fan was owned by Irene Sophie du Pont (1877-1961) and shows a glimpse of her world between 1890 and 1895 when she was between thirteen and eighteen years old. Many of her scrap pieces represent hotels, monograms, American flags and eagles.

On the front, there is a cut-out of a green DuPont Smokeless Powder keg. Her father who worked for the DuPont Company supervised the smokeless gunpowder plant at Carney’s Point, New Jersey.