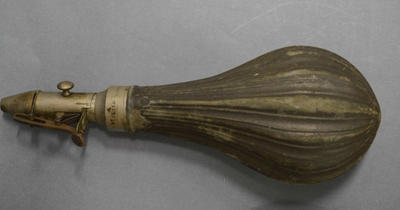 Description
The Capewells were one of the English flask-making families who immigrated to New England in the mid-1800s. These families helped jump-start powder flask making in the United States. Brothers George, Mark, and Joseph began making flasks in Connecticut in 1845 and produced a wide variety of designs. Fluted designs were some of the most common types made during the nineteenth century and made flasks sturdier and easier to grip. The Capewell Manufacturing Company was best known for its commitment to innovation and this flask contains one of their patented tops. Many companies tried to invent new flask tops but the Capewells were one of the most successful innovators in the business. Tops like these were made to help sportsmen better measure the powder they poured into their firearms.