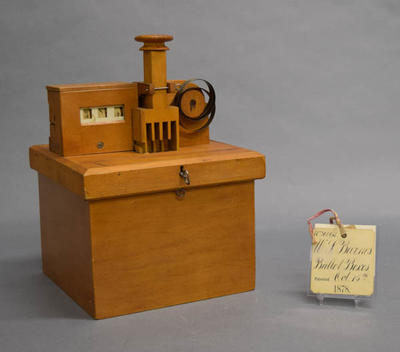 An incredibly controversial, but immeasurably important Election Day is looming for us here in the U.S. Appropriately, within the last couple weeks, I happened to unpack a Ballot-Box patent model (below). This patent was granted to Willis L. Barnes, of Charlestown, Indiana, on October 15, 1878. Barnes’s Improvement in Ballot-Boxes claims that “the mechanism can be operated only when a ballot has been placed upon the receiving-fingers, and, when operated, will deposit the ballot in the box, close the box, register the ballot, and sound an alarm” (Patent No. 208,951), Patent Link.

One of the most interesting features of this patent model are the three revolving digits behind a glass window. Why would it be necessary to register the number of ballots that have been put into the box? Ballot-box stuffing, the act of adding ballots in order to skew results, was not an overly common occurrence, but it was still something many wanted to avoid. Barnes’s patent seems to safeguard against such illicit activities. It would have caused extreme suspicion if the number of votes within the box exceeded the number on the register.

Voter abuse was common around the time that Barnes was granted his patent. However, the Australian ballot was starting to be introduced in the United States (beginning in Louisville, Kentucky in 1888). Before the Australian, or secret ballot, voters would get their ballots from the respective political parties. It was common for each party to have different ballots, and therefore an individual’s vote was not secret. With the Australian ballot, voters received a standard, blank ballot with the candidate’s names and parties listed. The voter, often in private, placed a mark next to their choice. On one hand, the secret ballot decreased intimidation at the polls. However, the secret ballot also created an obstacle for illiterate citizens and may have led to more robust literacy tests.

The United States has certainly come a long way in how we vote. Today we use paper ballots with optical scans or electronic voting machines that store our votes directly into a computer’s memory. Our advancements in voting technology have overcome issues such as ballot-box stuffing, but in turn have left us vulnerable to other issues like hacking. It will be interesting to see how these issues will be combatted as time goes on.

Keyssar, A. (2009). The Right to Vote: The Contested History of Democracy in the United States. New York: Basic Books.