What do bees, spiders, and sheep have in common? An inventor! 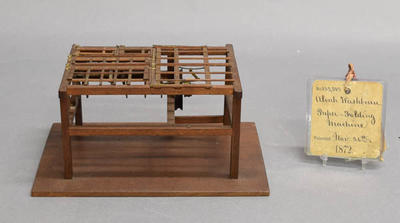 On November 26, 1872, Alvah Washburn patented an Improvement in Paper-Folding Machines. His invention “consists of a series of light folding-frames hinged on the top of a table, and provided with operating-gear actuated by a cam-shaft, which said frames are arranged in such order and sizes relatively to each other that a printed sheet delivered on the table over all the folding-frames by the depositors of a printing-press will be folded in the order of folding it by hand and thrown off the machine by another frame similar to the folding-frames…” (Patent No. 133,393). Patent Link

I’m not exactly sure what attracted me to this model in the first place. Perhaps because it was visually interesting? This model is incredibly detailed with its intricate, latticed surface and different sized folding frames. Or perhaps because I liked the name “Alvah”? Whatever the case, the model and invention prompted me to perform a quick search on the inventor.

It turns out that Mr. Washburn was known as “the Tinker” within his hometown of Medina, Ohio. This nickname may be appropriate, as his interests and professions seemed to vary. He was co-founder of the Medina Foundry Company, but also at one time worked with the A.I. Root Company. The A.I. Root Company, still in operation today, specialized in bee keeping and bee products. Washburn is mentioned and praised in a monthly “Bee Culture” volume for his help in apiary construction (first column, last paragraph). The volume proclaims that his skills “are destined soon to make him better known to the world.”

And he certainly did have an impact on the world of invention. Washburn also held patents for a Machine for Grinding Spiders (Patent No. 244,010: don’t worry, not the arachnid, this was more of a polishing wheel for a mechanical part called a “spider”), an Improvement in Machines for Shearing Sheep (Patent No. 59,103), and a Machine for Dressing Feathers (Patent No. 65,782). Washburn also reissued his Improvement in Paper Folding Machines in 1873. Quite an array of patents!

Alvah Washburn is a wonderful example of the unexpected research potential of some patent models. Sometimes, it’s possible to become interested in a certain model by looks or patent document alone, conduct an internet search, and have nothing of great substance turn up. Some inventors have, unfortunately, been lost to time so far.

But, once in a while, you get lucky and find the town “Tinker”.

What do bees, spiders, and sheep have in common? An inventor!