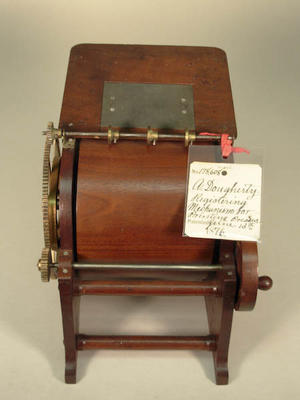 While reading through the patent document for Andrew Dougherty’s Improvement in Registering Mechanism for Printing-Presses, I was surprised to find his claim that the invention was “especially serviceable in printing… playing-cards” (Patent No. 178,608). Patent LinkThis was a very specific claim, so I decided to look up Mr. Dougherty to see if I could find out any more information on his life, career, or other patents. I was blown away by his story and success!

Andrew Dougherty and his parents immigrated to the United States from Ireland when he was only 7 years old. When he was a teenager, he held a variety of jobs. He worked for a time as a whaler off the coast of New England, and then at some point moved on to work for a playing card company. If you ask me, these are two of the most opposite gigs I can think of.

In any case, the playing card industry seemed to appeal to Dougherty, and at age 21 he had saved up enough money to open his own playing card business in New York City. This business would eventually merge with the Coughtry brothers and become Coughtry and Dougherty. This company created stencil-colored cards.

Once Coughtry and Dougherty dissolved, Dougherty went into business for himself again. By 1870 his company could produce three and a half million decks a year. Dougherty is also credited with developing and patenting two finishes for cards: the Linoid finish and the Pegulose finish. The Linoid finish was an extra coating that decreased stickiness, while the Pegulose finish allowed for the cards to be washed if soiled. Dougherty also patented Triplicates, which was a design feature that included two small depictions of the card in the top left and lower right corners.

Dougherty’s business was eventually purchased in 1907 by the United States Playing Card Company. One of Dougherty’s decks, named Tally-Ho, is still for sale to this day. The deck’s packaging has ‘A. Dougherty’ printed on it, and the cards are coated with the Linoid finish.