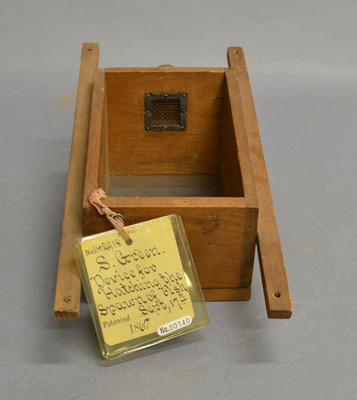 Cataloging the patent model collection continues to be an interesting journey. A remarkable object crossed my desk earlier this month: Seth Green’s patent model for a Device for Hatching the Spawn of Fishes. Excuse the pun (or don’t), but this model allowed me to dive head first into the world of pisciculture: the controlled breeding and rearing of fish.

Seth Green, known today as the “Father of fish culture in North America”, was born on March 19, 1817 in Rochester, New York. As a young man he struck up friendships with the nearby Seneca Native Americans, who taught him about hunting and fishing. With a profound respect for nature instilled in him, Green learned about the lifestyle of fish through diligent observation.

Through his observations, Green realized that fish were not a limitless resource. For this reason, he dedicated much of his life to ensuring the rivers of New York State were restocked with fish for market and sporting purposes. His first endeavor was a fish market in Rochester, which he stocked by fishing the shores of Lake Ontario. During these fishing trips he observed the spawning of Atlantic salmon.

That observation set him off on a path to open his own hatchery in Caledonia, New York. He worked to propagate salmon and brook trout at first, but then in 1867 moved on to other species such as American shad. That same year is where our patent model comes in: his Device for Hatching the Spawn of Fishes (Patent No. 68,871).Patent Link Green says in his patent document that the apparatus “should be anchored in a current, for shad, but may be anchored in still water for certain other varieties of fish, and for frogs… The case must be open after dark, for shad, as the smaller fish which would take the young shad only feed during the day. This gives the young shad an opportunity to take care of themselves as nature dictates.”

Concurrently, Seth Green became the first New York State fish commissioner, working alongside Robert B. Roosevelt and Horatio Seymour. The trio worked together to create a regular restocking program for the state, using fish from Green’s Caledonia hatchery. But Green’s efforts weren’t just concentrated to New York State. He introduced shad down the East Coast as far as the Savannah River in Georgia, and even sent 12,000 shad to the Sacramento River in California.

Green passed away in 1888, but his name still lives on through the hatchery in Caledonia, which was listed on the National Register of Historic places in 2015. You can visit his grave in Mount Hope Cemetery in Rochester, where you can also find the resting places of Susan B. Anthony and Frederick Douglass.