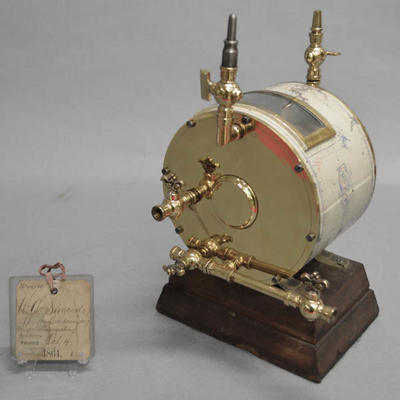 Of the hundred or so patent models I have cataloged, the most common type I encounter are carbureting or “air-gas machines”. What’s an air-gas machine and why were so many inventors submitting them for patents? Like many inventions, its genesis lies at that intersection of a public need, potential for profit, and making something out of some useless stuff just lying around.

For centuries, folks depended upon lamps and candles for illumination. These methods were dim, unreliable, and dangerous. As the industrial economy spurred the growth of factories and concentrated the population into cities, the need for artificial light skyrocketed. With such a demand, and big contracts to supply lighting to entire cities, inventors competed to find a better solution.

The original solution was gas (the kind you cook with). Factories called “gas works” burned coal in enclosed ovens to create “coal gas” or “town gas”. This illuminating gas was piped into street lamps and lighting devices in homes and businesses.

But building gas works and laying all the piping was slow and expensive. Highly-populated areas, business and shopping districts, and affluent neighborhoods were the first to receive gas service. What about working class neighborhoods, side streets, and rural areas outside the big cities? Inventors explored how to make gas cheaply in one stand-alone machine—sort of like a gas generator.

The first obstacle was finding a fuel source. Inventors could not scale down the process of burning coal to produce gas. They began experimenting with new and inexpensive alternatives.

By the 1860s, kerosene derived from oil recently discovered in Pennsylvania became widely used as a fuel for lamps and lanterns. But there were other distillates from the process of making kerosene for which no one could find a use. Two of these were naphtha and gasoline. If kerosene produced light, what about gasoline or naphtha?

This is where air-gas machines enter our story. Inventors discovered that if volatile liquids like naphtha or gasoline were mixed with air, the result was an illuminating gas. By the 1870s, over a hundred companies in America were working on bringing this process to the marketplace. The resulting technology provided artificial lighting for streets, buildings, and even some homes until electricity became widely available.

Of the handful of machines I cataloged, two stand out. They were submitted a year apart by Boston inventor Warren A. Simonds. And they are beautiful machines! One used rotating pierced metal globes to spray naphtha in the air. The other used tiny buckets attached to a rotating conveyor belt. Simonds must have believed his process would be highly profitable as he spared no expense in producing two attractive and elaborate models. 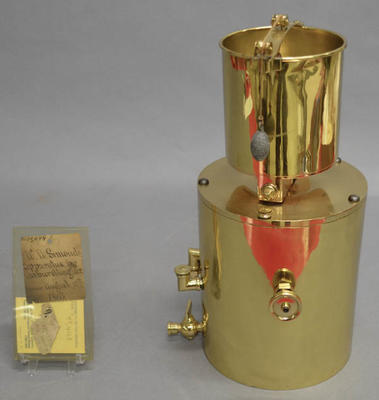