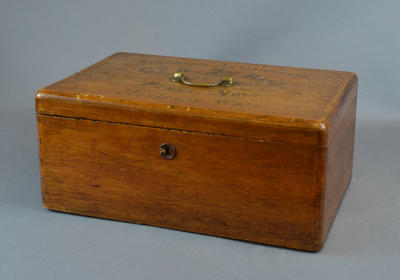 When we acquire objects for the collection here at Hagley, we do so because they fit with our collecting priorities and support our mission, or if we’ll use them in upcoming exhibits. Occasionally, though, they are a little mysterious.

That’s the case with the latest addition to our collection. The object tells an interesting story and is perhaps connected to the du Pont family…perhaps.

This box may look like an ordinary box, but it’s actually a very rare object. This is a document box used by the Stockton Artillerists when they served in the Mexican-American War. In the box, was a tag with a note stating that it belong to the wife of Francis N. Buck, the mother of Gov. C. Douglass Buck of Delaware, and to Alice du Pont Buck, his wife.

But, who were the Stockton Artillerists?

The Stockton Artillerists were a Volunteer Militia Company from in Mauch Chunk (now Jim Thorpe), Pennsylvania and named after Capt. Robert F. Stockton of the U.S. Navy.

Volunteer Militia Companies were formed in response to the perceived ineffectiveness and vices of the regular militia in the early 19th century. Many of the semi-annual militia meetings, or musters, seemed to have turned into excuses to indulge in plenty of drinking and very little military training- parodies of them abounded.

The Volunteers were different, these groups incorporated themselves into companies, and provided themselves with uniforms, equipment and weapons. Hence, they often took their duties more seriously. Volunteer Militia Companies came to be very popular in Pennsylvania, New York and other states, and were a way for people to show-off their patriotism and civic or ethnic pride.

The Stockton Artillerists answered the call for volunteers to fight in the Mexican-American War on December 24th, 1846, and marched from Mauch Chunk to Philadelphia, then Baltimore, finally arriving in Pittsburgh on New Year’s Day, 1847. There, they were mustered into Federal service as Company K, 2nd Pennsylvania Volunteers and would go on to serve with Gen. Winfield Scott’s army that besieged Veracruz, fighting in the Battles of Cerro Gordo and aiding in the assault on Chapultepec and marching into Mexico City.

So, how does it relate to Constance Margaret Douglass Buck?