From the Object Files: The all too true tales and back stories behind some of Hagley’s most remarkable collections. (Part 3) 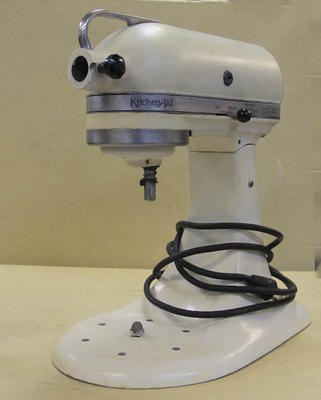 In collections, the most frequently asked question is what? as in what is that? Then the second most commonly asked question has to be why? As in why is that in a museum? The question usually comes up around something so familiar it is hard to imagine that they have much importance at all. But it is often the case that the most ordinary things can have the most extraordinary stories.

Take this little beauty, the KitchenAid mixer, more at home on a wedding or holiday wish list than in a museum. The story of how this must-have device for the affluent cook came to Hagley is a simple one. It is part of a collection of household objects belonging to Louise du Pont Crowninshield, the last member of the DuPont family to reside at Eleutherian Mills, and is representative of a chapter in the life of that stately house. But the story of how this little mixer came to be is a more complicated tale.

Around this time the Hobart Electric Manufacturing Company, in order to sell more motors, began attaching its small motors to coffee mills and meat grinders. In 1908 one of its engineers, saw a baker manually mixing bread dough and thought that there must be a better way. His ‘better way’ became the electric Hobart model H Mixer, an 80 pound commercial behemoth Work soon began on a home version of the Model H. Ten years after that run-in with that baker Hobart debuted the model C, it was marketed as a ‘food preparer’ that not only mixed and whipped but could grind meats and juice citrus.

The model C wasn’t an instant success. The machine was bulky, heavy and expensive. In fact it is a testament to the skills of Hobart’s almost entirely female door to door sales force that any of these things were purchased at all.

As the 1920’s rolled on Hobart introduced several new models of its KitchenAid mixers, each one lighter and smaller than the last. The mixer really reached icon status in the late 1930’s, when Hobart hired Egmont Arens to redesign the mixer. The new and patented design was so loved by customers that it has survived with very little change for more than half a century.

This is where Hagley’s mixer enters the picture, a model of modern domestic efficiency and another example of how inspiration can come from anywhere and innovation can be found everywhere, even in the kitchen.

From the Object Files: The all too true tales and back stories behind some of Hagley’s most remarkable collections. (Part 3)