From the Object Files: The all too true tales and back stories behind some of Hagley’s most remarkable collections. (Part 1) 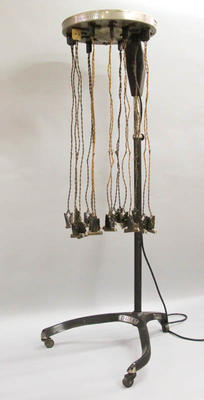 It often happens that a trip into museum storage will generate questions, and most likely the question is “What is that”? A recent excursion generated just such a discussion, when a colleague noticed a tall oddly shaped metal object at the back of the room and asked “What kind of lamp is that”? My answer, that it wasn’t a lamp at all but a machine for perming women’s hair, was sufficient enough at the time. However, what it was is only part of the mystery, how and why it worked and why it was here were bigger questions. As it turns out, that odd machine was a key innovation in the pursuit of the perfect coif.

The quest for curls has taken many forms over the years. We are all familiar with curling irons or curling tongs; heated rods around which hair is wrapped with a clamp to hold it in place. And presto! Curled hair! And we are all familiar with permanents; hair is secured around a curler and a chemical solution is applied. And presto! Permanently curled hair. But why combine the two?

In the initial days of permanent waving, the chemical solution needed to be heated in order to sufficiently change the hair structure to make it hold the curl. In these early incarnations, curlers would need to be heated individually. Heating them with electricity allowed the curlers to all be heated at once and to a controlled temperature, producing better curls with fewer injuries.

The first permanent wave machine to use electricity to heat strands of hair was patented in England by Karl Nessler. Nessler’s machine combined electric heat with a chemical process to produce lasting curls. It wasn’t an instant hit in London, but the idea was revolutionary enough to inspire many alternate versions on both sides of the Atlantic. One such machine was invented by Marjorie Stewart Joyner, an African American, in 1939. She created and patented a machine that could add curl to straight hair or straighten curly hair, using electrically heated metal rods. Hagley’s machine, which came to us as part of the Amram/Brick Woman Inventor Collection, is a representation of further improvements on Joyner’s work.

In the middle of the 20th century a new all chemical process of perming hair, that didn’t require heat, was introduced and these types of machines began to disappear from salons. This odd looking contraption is now a permanent (ha!) reminder of man’s (and woman’s) ability to apply a little ingenuity to an everyday problem and possibly change things forever.

From the Object Files: The all too true tales and back stories behind some of Hagley’s most remarkable collections. (Part 1) 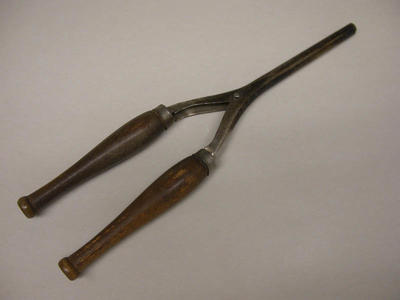 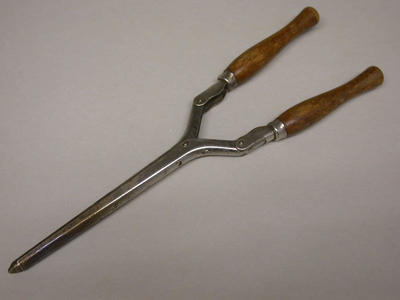 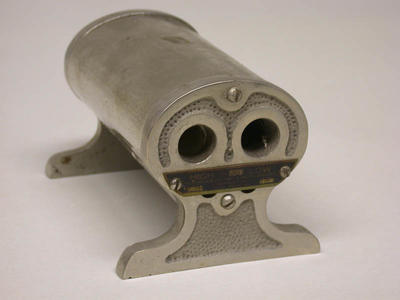