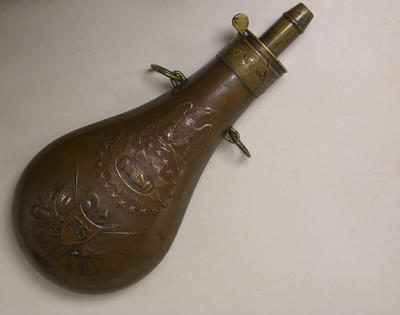 Description
During the nineteenth century, the U.S. government relied on private companies to manufacture powder flasks for the military. Most of these contractors, like Batty Brothers, were located in New England, the most-heavily industrialized region of the country. The founders of this company, Joseph H. and John T. Batty, were immigrants from Sheffield, England. Along with their father, they had been partners in the short-lived Springfield, Massachusetts, firm of Batty & Sons. Following their father’s untimely death in 1845 they reorganized as a new company. Batty Brothers produced numerous flask designs over their fifteen year existence but are best known for their flasks made for the military from 1847-1858. During this time they manufactured a “Peace flask” based on the design of the rival Ames Manufacturing Company. The Batty design is distinguishable by its use of an oval of stars around a pair of clasped hands rather than a circle.