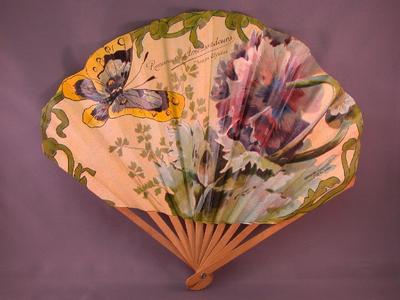 A lady’s hand fan was one of the most important clothing accessories during the nineteenth-century. Not only decorative, they also had a practical purpose of moving air for cooling. Color, design and style indicated not only moods and events but also the highest in modern styles. There were all types of fans. One example is a mourning fan which became popular following the death of Queen Victoria’s husband Albert in 1861. After his death she wore only black for the rest of her life. This mourning style was translated into the fashion of using solid black fans for mourning the death of public figures but also for friends and family.

An interesting aspect of hand fans is the special language which developed whereby moving the fan in certain ways conveyed information or wishes according to Parisian fan maker Pierre Duvelleroy in early in nineteenth century. These include:

The museum collection has more than fifty hand fans with most of them formerly owned by du Pont women throughout the nineteenth-century and into the twentieth. One of the earliest fans is French fan in an elaborate presentation case which dates between 1808-1811. This light and delicate design was typical of French Empire Style. Presentation cases were made not only to preserve the fan but also to acknowledge who had owned it. In this case it was owned by Anna Van Dyke, Mary V. du Pont and Greta du Pont Barksdale. Treasures like these were frequently handed down throughout the generations. Louise du Pont Crowninshield owned eighteen fans. She lived through the transitional period of hand fans where the more decorative ones gradually began to fall out of favor. Her collection consists of mostly of Oriental made fans with decorative paper scenes, ostrich feathers fans, and souvenir fans acquired when she travelled overseas. One colorful paper fan from Paris, France and made by Goossens Frere et Soeur (brother and sister), and dates to around 1900 and represents the “Restaurant Ambassadeurs, Champs-Elysees”. 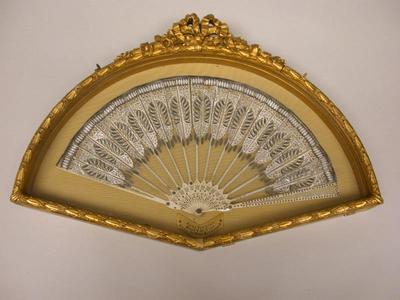